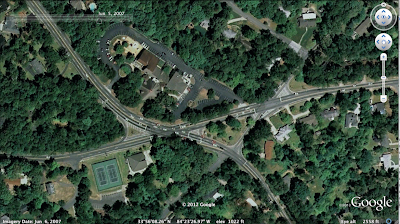 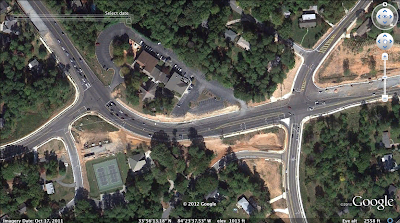 This is one of those "road/highway reconstructions" I like seeing in Google Earth (no telling how many I've spotted and lost). This is in Marietta, Georgia, and I have to say: what a nightmare, having that four lane road stripped out for a huge seven lane or so highway. If it wasn't for the traffic, they could've converted it to a two lane road with turning lane and bike lanes...

(yes, this is the same view level, they widened it dramatically: look at the buildings for comparison)
Posted by Pseudo3D at 8:38 PM 0 comments

Some of these will be utilized in a better fashion on my other blog soon enough. That and Wikimapia. 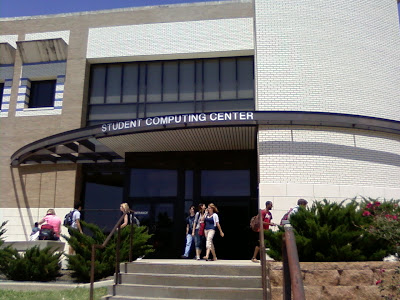 The Student Computing Center, built at the same time (and attached to) the Evans Library Annex. Unfortunately, it doesn't have interior access. 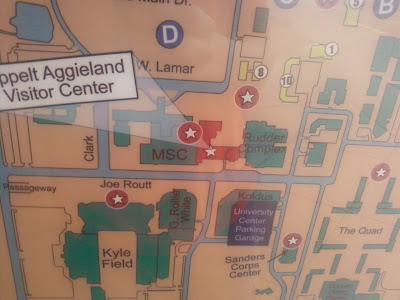 This was outside the William A. McKenzie Terminal, on the far side of campus. It's kind of neat because it shows the MSC's expansions over the years, including the original 1950s structure (top part), 70's (south part), and ~1989 part (east part with the now-demolished portico). It doesn't show the late 2000s rebuild, though. 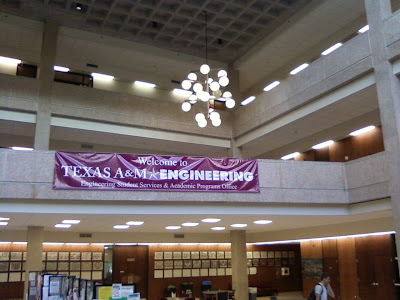 Zachry Engineering Building, with chandelier. This is just awesome. 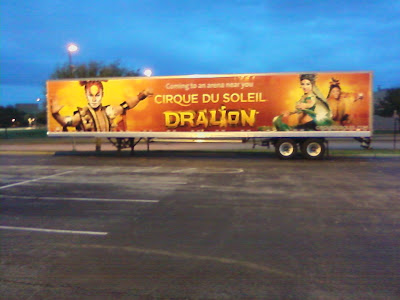 Early morning outside of Reed Arena, there was a Cirque du Soleil show coming up. 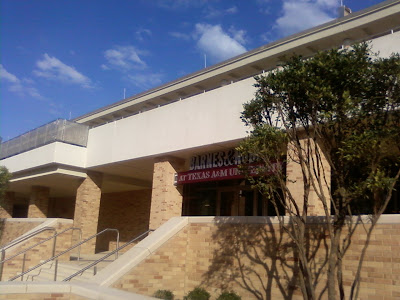 Detail of the MSC's bookstore entrance, compare and contrast with this shot: 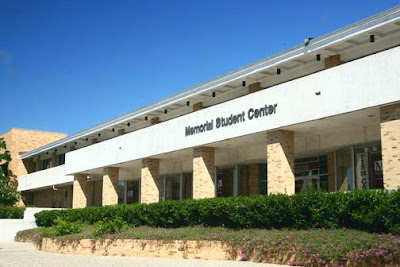 What I really wanted to do was show the old "Memorial Student Center" labelscar above the Barnes & Noble sign, but alas, my phone isn't good enough.
Posted by Pseudo3D at 7:44 AM 0 comments

Remains of the week

- Ron Paul came to campus last week. While I do have sympathy for libertarian causes (a lot of them do make sense), it didn't help that the stereotypical libertarian crusaders were out in full force, including a particularly angry guy with a huge sign that said "I LOVE RON PAUL except for foreign policy I LOVE JESUS except for loving your neighbors". He was the one screaming that the "same rich people who support Obama support Romney" and "George Carlin was right about this country", except using lots of expletives that we don't use on Carbonizer. It's people like these that make libertarianism unable to gain a huge momentum in the country, and people like these that make the Occupy movement seem like nice and sane Americans.

- I have no major problems with the Dining Services being 98% minority (yeah, really), but please, be able to understand English. It keeps the lines moving, and people from getting frustrated.

- I was contemplating Lion and moving on like a Good Mac User, but in addition to losing my favorite apps (including those that their superior versions were Carbonized, and the Mac OS 9 versions would, at best, be a replacement). More practically, I thought about my parent's frustration with it.

- Given that my GBA hasn't ruined the ribbon cable yet, I found a replacement case for $9.99, considering that's way cheaper than other used GBA stuff. Sounds like a great future project.
Posted by Pseudo3D at 6:05 PM 0 comments

For the third time in about two days, I was called by 876-284-6658, harrassing me (before 8 am, even!) about winning something. I caught wind of the accent (which was hard because it was trying to be an American accent), the word "lottery", "980,000 US dollars", and "Wal-Mart gas station". It was especially obvious since I don't give my number out (and not to Walmart, especially) and my local Walmart doesn't even HAVE a gas station. Didn't give him long enough to bait me or anything, but he's blocked. He gets the honor of being the first blocked number on my cellphone. Congratulations!
Posted by Pseudo3D at 6:52 AM 0 comments

I got my Game Boy Advance SP for Christmas 2005, but it met a fatal ending last night minutes before midnight. After a futile attempt at the Elite Four again (in Pokémon Yellow), I tossed it off my bed (which is only a foot or so above the ground) and maybe it was the headphone adapter plugged in, but it cracked in several places, pulling it apart if it opened or closed, and there's a crack under the screen that I can't access.

So that means I can't play games on it, essentially, and it needs to be replaced. I could play the old Game Boy games on the Game Boy Color with its terrible screen and crummy speakers, and the GBA games on the DS, but that's not really the same thing. This means that it needs to be replaced. It's not terribly urgent, however (maybe next weekend at the earliest) and its not like I don't have other games to play (The Legend of Zelda: Ocarina of Time NEEDS to be beaten). Either way, it is time to put Pokémon dormant again, even though I have plans once I get everything working...

- Reset the Cinnabar Gym and beat Blaine multiple times for experience, money, and his TM (also to sell)
- Go through Pokémon Mansion for experience, items, and more money
- Use GameShark to be able to buy Rare Candy, and also use it to catch Mew at Level 50
- Replace Mr. Mime with Mew, Moltres with Flareon, and Venusaur with Snorlax
- Upgrade Snorlax to Level 50 (at least), Flareon to Level 55, and Pikachu to Level 60
- Teach Flareon an awesomely powerful Fire-type movement (also with GameShark)
- Make sure I have nine Lemonades, five Full Heals, three Max Potions, and four Revives before facing the Elite Four

Ultimately the plan is to catch all 151 (assisted with GameShark, of course), making certain duplicates and catching new copies of Pokémon, then moving onto Crystal and beginning the journey anew. Crystal will get Pokémon back from Yellow via Time Machine (they might come with items).

In other news, I'm putting The Lost Vikings dormant, gonna give Machinarium an occasional shot, and focus on The Legend of Zelda: Spirit Tracks in terms of portability (and of course Zelda 64).


EDIT: Aaaaaaaaaaaaaaaaaaaand while tooling around with GameShark trying to get said Mew, I ended up wiping my file. I made a backup on the Mega Memory Card not too long ago, but that's a lot of lost ground (I think I need to try Blaine and Giovanni again). Yup, I can DEFINITELY wait about getting my Game Boy back.
Posted by Pseudo3D at 8:55 AM 0 comments

A day late, but one of the many things you can do with your friends who use a Mac is to figure out your mark's favorite Internet browser (Safari, Chrome, Firefox), use Command I, click on the icon in the box, Command C, and close it.

Then quickly navigate to /Applications/Utilties/AppleScript Editor and then copy and paste this:

Save it as an Application and name it the same name as the Internet browser. Then use Command I again, click on the icon, and Command V the new icon into the script. Drag the Internet browser off the Dock at the bottom of the screen (provided it isn't already up) and swap in your new fake application.

Old Mac hands should know this one, but it's great fun to those who use a Mac because it's cool and have never mucked around the Utilities. I know I have friends like this. Anyway, use it before they figure out what you're up to. Sit back and watch the fun!
Posted by Pseudo3D at 3:19 PM 2 comments