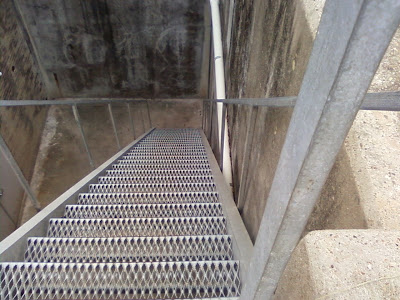 A steep narrow metal staircase descending about one and a half levels below ground. Eek.

Here's a book I got for Christmas, Reimagining Detroit. What bothers me is that he basically says how Detroit can't be this fantasy city that will rise from the ashes like other books tout, and then goes on to elaborate (and useless) scenarios. In a nutshell, part of the book is realistic and addresses real problems, and some parts aren't. Let's start with the positive: a significant part of the book is about urban gardening in vacant lots and its benefits, including some drawbacks like:

- The soil in Detroit has all sorts of broken glass and trash, that is, if the soil isn't poisoned with toxic heavy metals
- Not a lot of people: people with jobs, young people, really want to do urban farming
- A lack of a local food economy

It also talks about how Detroit itself (not even counting the suburbs like Grosse Pointe or Dearborn) is huge. Boston, San Francisco, and Manhattan could all fit rather comfortably in the city limits. This sprawling size allows it to become more of an urban/suburban/rural hybrid, complete with large yards, lots of wildlife (enough to be hunted, even), and room for neighborhood parks.

Unfortunately, for every good part of the book, there's a bad side.

For example, it has a chapter on "Road Diets", and how the roads can be altered to make them more pedestrian-friendly. He also mentions converting some of the outside lanes on the main Detroit roads into bike lanes, which is pretty worthless if no one rides bikes, plus the pavement is so awful in Detroit that it would be difficult anyway. Some of the problems he mentions, like how seniors and parents with children find it very difficult to cross the huge roads before the light changes can simply be fixed by installing pedestrian crossings at major intersections. By simply reducing the lanes people need to cross, it also encourages jaywalking, which is never a good thing.

There's also a section about roundabouts, but while the cost savings of installing roundabouts vs. intersections is debatable, there is a downside. Sure, roundabouts cost nothing to run and maintain and it does slow down traffic, but there's always the dark side to slowing down traffic, specifically, emergency vehicle response times, which in a city with a decent amount of crime is bad (also bad: a city just about bankrupt). Bottom line: it's a bad, delusional idea.

There's another section about "daylighting" streams, streams that were simply buried with dirt (causing flooding and sewage problems) and restoring them. The problem is, while he gives plenty of examples in other cities, from St. Paul to Kalamazoo (Michigan) to Seoul, a rather large creek is buried underneath Detroit, and daylighting it would be a tremendous cost that the city simply cannot afford (or would want to do).

The more pressing problems, like the financial problems of Detroit (which is a complicated process in itself) simply isn't mentioned. It does address some ideas are not realistic, like a retail mecca downtown or a big Internet company establishing a branch.

The other thing that was left out entirely is how some people living in Detroit simply don't care, and are nothing but a hindrance to the city's overall development. Even in some of the better neighborhoods, a foreclosed home selling for cheap will be stripped of EVERYTHING of value. We're not just talking about copper wiring, here: these people will steal even the siding off of the front, and in plain view. These aren't the type of people that are willing to band together and make their neighborhood a better community. These are people who would rob the corner liquor store.

Overall, Reimagining Detroit really has little to separate it from the pack, with only a list of ideas grounded by the fact that most of them won't work.
Posted by Pseudo3D at 9:38 AM 2 comments

The Malls of Houston Today

I know I haven't made much process in that Houston tourist guide I was scanning, but I've got something way more exciting. I recently checked out a rare book called Houston Today from the college library, a thick (less than a centimeter) 1974 guide to new development in a city which had helped send the U.S. to the Moon, and in a city riding high on oil while the rest of American cities were in steep decline. It contains a list of new development and upcoming things in and around Houston, including the tunnel system downtown, some futuristic renderings of the Houston Center complex (most of which were never implemented: even the mall planned is now little more than a food court), the Astrodomain (Astrohall+Astrodome+Astroworld+nearby hotels), Sugar Creek (one of the, if not the first subdivisions that transformed Sugar Land from a blue-collar factory town to a large, upscale suburb), LBJ Space Center, Greenway Plaza (a development of US-59 that demolished the last of the Lamar-Weslayan neighborhood) and even a prototype The Woodlands. Where Sawmill Park & Pool is (et. al.) at the corner of Sawmill Road and Grogans Mill Road), it was to be the Village Center (for that "village", a term for the neighborhoods of The Woodlands), which would include "The Wharf, a tri-level shopping area with theaters, restaurants, indoor ice rink, retail stores, boutiques, and a 1/2 acre 'ecological parking lot' paved with a pourous asphalt that allows rain water to seep through and return to the natural water table'". This never came to be, obviously, but it's still fun to look at that type of thing.

The book was in pretty poor condition (information on "Beekman Place" looked like the pages had been cut out), similar to other old books in that part of the library. A Sears catalog was torn and tattered. I found an old map of campus with the streets labeled in another book, but the other labels on the page (such as what it was, etc.) had been whited out!

I wish I could've scanned the entire thing but instead decided to focus on two cooler things: mall maps!

The first is the Galleria. Even though it was called "Galleria Post Oak" in 1970, it is stylized here as "theGalleria".

Here's a store list, with the stores long gone (except for maybe Motherhood Maternity and Tiffany's). Also note that there's a movie theater, and a side corridor featuring smaller stores like gift shops and art galleries (these mall-within-a-malls were very common at one time). I don't know the exact date of this, but I'm going to say early 1970s. 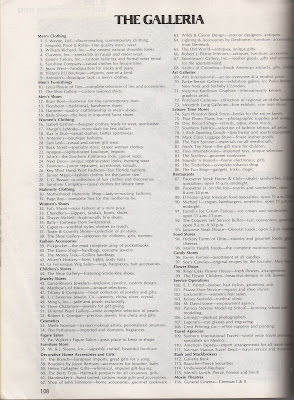 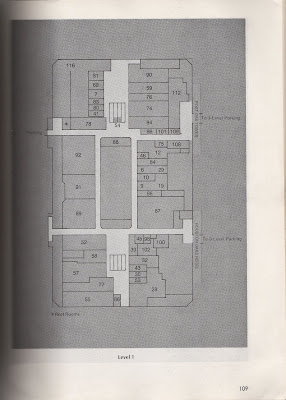 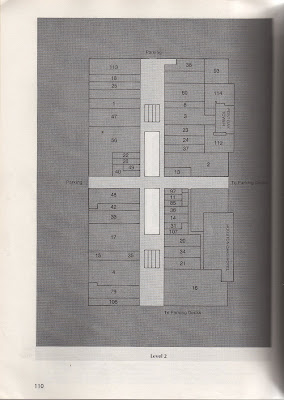 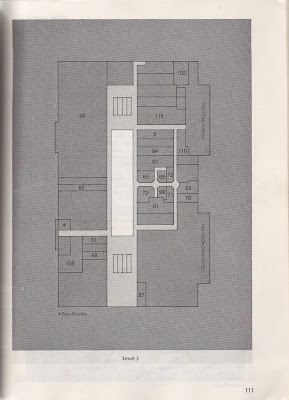 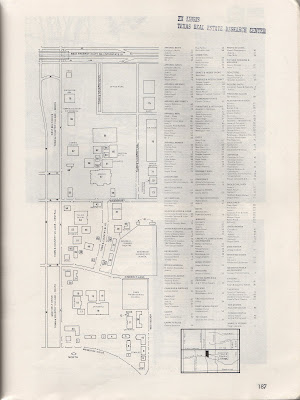 Today is February 6, 2012, the day the "Humans vs. Zombies" game kicked off at the campus (it's basically tag with Nerf guns). The story from 2010, outlined at the Humans vs. Zombies Wiki featured Ol' Rock (a fictional Texas A&M Aggie mentioned in stories of the past...and future apparently) and a small band of survivors coming across the ruins of Texas A&M University, which is still standing with "minimal damage", which I can understand: some of the buildings on campus probably were built to withstand an apocalypse. Unfortunately, I saw no Nerf guns or otherwise, despite a few posters advertising this event around campus and surrounding areas.

Yesterday, I put the screws (for good) to "Single Track Rails", which consisted of two posts, both from October 29, 2009 (it was that old): "Welcome to Single Track Rails! While this may sound like Two Way Roads (and it is by the same person) STR is a completely new concept.

Single Track Rails focuses on railroads, especially abandoned ones. We may also explore some other aspects of railroads...


Stay tuned!" and a feature on the International and Great Northern Railroad, in which there's nothing in there that I didn't republish later on AbandonedRails.

That same day, I registered another website: evenings with (old) games, in which I play a game, usually pretty old, and write about it. Maybe it's an old favorite. Maybe it's something I haven't played in years. Maybe I've never played it.
Posted by Pseudo3D at 10:00 AM 0 comments

I was feeling a bit nostalgic last night (it was a thunderstorm, too), so I pulled out my Game Boy Advance SP and Pokémon Pinball for a little gaming. To my surprise, it worked quite well (there was a time when none of my original Game Boy games worked for some reason (December 2007, according to a forum post I made a while back) and that put me off of Nintendo portables for a while (I did get a Wii that month, however). So I was racking up a high score in the Blue table when I realized that the Rumble wasn't working, and I know I had turned it on. There was always supposed to be a pleasant buzz when Pikachu recharged your ball so it wouldn't drop down and cause you to lose it, but that buzz wasn't there.

So I cracked open the cartridge itself (after saving and turning it off) and discovered a Heavy-Duty Panasonic AAA with Japanese lettering on it, and I realized that this was the original battery, finally giving out after years of storage and off-and-on usage. It had been there for about 12 years. I replaced the AAA battery and found that the Rumble was back in full force, stronger than ever, but perhaps a bit too strong. The European version had a way to configure the rumble (of course, it also had pre-set configurations instead of choosing your own set-up). The genuine surprise was that even though the AAA battery had gone dead, there was no corrosion or leakage (unlike those "Kingever" batteries that were in my TI-84 Plus...I could pour baking soda on it and watch it fizzle).

Chalk it up to superior products, I suppose.
Posted by Pseudo3D at 6:38 AM 0 comments

In any college campus, there will be demonstrations: some angry (and/or enthusiastic) speaker riling about a crowd about something or another. There's a spot next to the Administration Building where the people gather and blow steam about some cause (usually liberal-leaning, but not always) about something or other. And while they may be certifiably insane and/or evil, they can do that because a) freedom of speech and b) college campuses are known for this type of thing. Better yet, these types of things gather a small group of people that aren't much more popular than the library coffeeshop, with an even smaller amount of people actually into whatever the speaker is foaming at the mouth about (some people just stop and move on). This reduces the overall chance that mob mentality will form, which is also good. Nobody wants a riot. Some of these things are more well-known controversies (immigration, gay rights, etc.) and some of them are just weird (there was a guy wearing a t-shirt that read "Foxhole Atheist", which I think refers to "there are no atheists in foxholes", but I'm not sure (you can never be too sure with some people).

Admittedly, the college I go to is relatively conservative (as far as colleges go, anyway) and as a result, gatherings of this type are smaller. Even circa 2006, I don't think there were tons of anti-Bush stickers stuck around campus, and no one is going to do something outlandish (i.e. strip naked and wear pork blood to protest war), or at least, not a large enough group of people to make it worthwhile.
Posted by Pseudo3D at 10:49 AM 0 comments