Remains of the weekend

I go on vacation to Knoxville, and this happens back in my hometown. Let's see, vacation was fun: I visit my brother in Knoxville, which seems like a cool place, not too big or small (city keyword is "scruffy", apparently), old, traditional, beautiful, fun, et cetera. They even hosted the 1982 World's Fair.

Of course, there's way too many dangerous hills in the rural-esque suburbia, narrow roads, crazy drivers, et cetera. It didn't seem as depressing as suburban Ann Arbor/Ypsilanti was, and there were cool things to see: the Smokies! An old Taco Bell! A Publix this far from Florida! Super Target! Trader Joe's! A cool downtown! The list went on and on. There was even a less-welcome sight: right in the middle of a somewhat upper class suburban area was one of these sleazy "adult video" establishments, except it had windows (yikes), though despite a few scantily dressed mannequins, there wasn't anything too explicit (from the outside, that is).

It was great seeing my brother (and Die Hard), eating lots of good food (gourmet pizza, omelets, blueberry pancakes, Memphis-style barbecue, et cetera), hiking in the Smokies (no bears, sad to say), and more, but it's great to be back home.
Posted by Pseudo3D at 2:44 PM 1 comments

Email ThisBlogThis!Share to TwitterShare to FacebookShare to Pinterest
Labels: vacation

I am not a smoker, though I hate blanket "smoke free" campus bans (especially if it's a state-supported university or college), simply because it tends to discriminate people even if there's plenty of fresh air (that can't be said in a building, for instance). I also have a dislike of anti-smoking propaganda simply because they try to twist facts for their own purposes. They make claims like cigarettes include 4,000 carcinogenic ingredients and things like tar. Kids (which they often target) erroneously believe that the cigarette companies actually PUT tar in cigarettes, which is nonsense (at least in American cigarettes, at least).

The fact is there are 600 trace ingredients that are put in, with some interesting combinations like butter, carrot oil, caffeine, and menthol. The problem, is of course, when they burn, they create those 4,000 chemicals they were talking about. If these anti-smoking propaganda pieces were honest, maybe kids would actually smoke less. With this kind of deception, it's no wonder why kids get into smoking, even today. But I digress.

Moving away from cigarettes, a common shrubby plant called mesquite (actually a deciduous tree, but most of them are shrub-sized), found in Texas and the like, is a nasty-looking plant. Physically ugly, full of thorns, generally inedible beans. But when it burns, it infuses things with a delicious taste (usually barbecue or chicken). Different woods burn different (pine has a very distinct smell, when the Lost Pines burned last year, it was in the air for miles around), but why is that? I mean, wood from tree to tree have generally the same chemical structures, but they all smell different enough and all give meats a different taste than normal.

I'm probably going to regret saying this, but I can't wait until Organic Chemistry II next semester, where we can study that type of thing. Yay!!
Posted by Pseudo3D at 1:46 PM 0 comments

Lockhart, Texas: the Barbecue Capital of Texas. It's one of those small towns that's facing increasing suburbanization (in this case, Austinitis), with a toll road nearly making a semi-circle around it.

It's also the site of a Dairy Queen.

Every year or so, I had gone with my cousins (taking a break from a family reunion) to seek three things: air conditioning, Wi-fi, and a good frozen treat.

But this was no regular Dairy Queen, with those red roofs and limited seating. This was a somewhat larger Dairy Queen.

It had a variety of cool features, including the humorous (except in this case, they were dead serious) "Medicare Corner", a playground, and a truly retro (or at least retro-inspired) signage bunch. 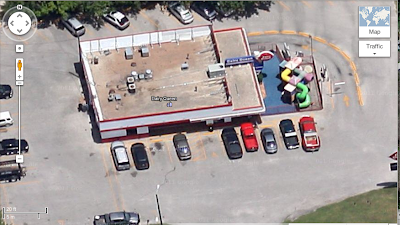 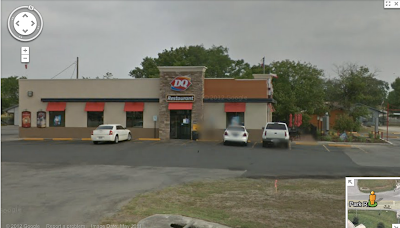 I didn't weep, but it's SHAMEFUL what they did to it.
Posted by Pseudo3D at 1:51 PM 0 comments