It's just a sketch I made about a week ago. It means nothing. 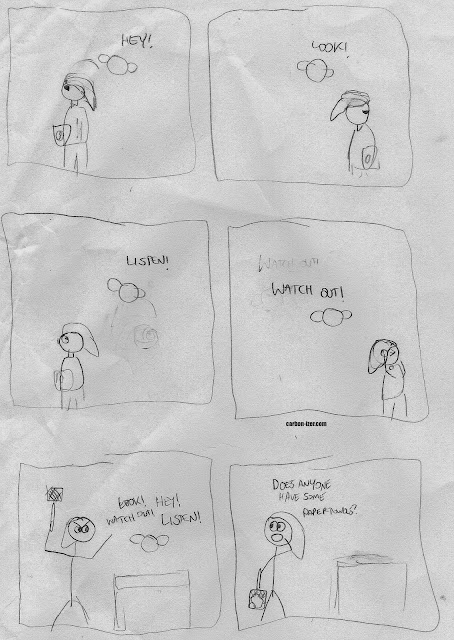 This was a sketch (unimproved) I did at least three years ago (if not longer). The whole "Navi is annoying" thing has mostly died down (there must've been rage on those late-1990s message boards), but I still enjoy the concept, especially the fact that Link maintains being silent until the last panel.
Posted by Pseudo3D at 6:57 PM 0 comments

So I was recently re-reading Calvin & Hobbes, a comic strip that ran for a bit over a decade in American newspaper. As I continue to age, it gets better each time and makes me wish it run a bit longer. I'm not going to go into a full description of it, because there's the Wikipedia page and you probably have already read it before, and if not, you should.

Hidden beneath the facade of Calvin, Hobbes, and his zany adventures both in his imagination and the "real world" was all sorts of commentaries on popular culture (nothing specific to the 1980s, but there was a lot of stuff on the way television has affected people's lives), opinion polls (I think that C&H was the first to use "[something]gate" as a byword for a scandal long before the media picked it up), philosophy (after all, they are named after philosophers), and a lot of criticism on the newspaper comic industry itself. There were a few strips on taking care of the environment but it never got too preachy or heavy-handed. Part of the intrigue of the comic strip is it's never really clear if Hobbes is real (as well as the other things that come about in the strip: vengeful baseballs and bikes, Calvin's inventions) or if it's all Calvin's imagination (there's evidence either way to support it).

But since Calvin & Hobbes is no longer in print (and I've exhausted the collections), as well as other great comic strips (FoxTrot was great, too, but it eventually switched to a Sunday-only comic strip with mostly pop-culture/nerd jokes, not the full strip like before), but since the local newspaper never even carried FoxTrot, it too was mostly limited to collections. The rest of the newspaper strips are pretty unremarkable at best.

A couple of years ago, I stumbled upon and was big into The Comics Curmudgeon which mercilessly skewers the oft-inane newspaper comics but I eventually dropped it, partially because I wasn't able to read the comics that I wanted to read (the Chron used to have the best comics page, with minimal ads and a build-your-own page—now, they don't even have few archives anymore), and most of it was just bad-bad. There's only so much you can take of stuff like Funky Winkerbean even when you're making fun of it. In that time frame, Brenda Starr and My Cage were axed, terrible comics like Reply All were given syndication, and Dick Tracy went from a hilariously awful trainwreck to what amounts to basically Dick Tracy fanfiction (with improved art!)

With the exception of maybe Brawl in the Family and Piled Higher and Deeper I've never really found a webcomic with consistent characters that I've liked enough to follow and archive-binge to follow it through. I've tried numerous strips and either found them too boring or too obnoxious, or both.

There are tons of comic strips today that are political commentaries, but most of them discount (or outright discard) humor, wit, or telling a good story in favor of commentaries that have the subtlety of an rhinoceros and are often extremely mean-spirited (inexplicably, these tend to be pretty popular ones--and no, the TVTropes article on the subject just covers the most blatant examples). The whole webcomic "industry" is pretty iffy too, with nearly every "big" webcomic (even if they still have a day job, which indicates that they haven't made it big--making it big in webcomics means you can sell the merch/ads) with a host of problems.

You could play "Bingo" with most of these problems: the author has a massive superiority complex, they oversexualize women, they indulge their own socio-political views and sexual fetishes, and go for the "Cerebus Syndrome" case in which webcomic authors (often unsuccessfully) try to take the strip into more "serious" territories. As egregious as some of these things are, they're common traps. And it's not just webcomics (though they are more extreme), it's in mainstream comics too.

Oh, and on that last thing, the "Cerebus syndrome", named after an indie comic book series that veered from a parody into an incredibly complex and dark series. While this isn't always pulled off badly in webcomics, it, along with webcomics that do try to pull off the "serious" stuff from the beginning, it always has the effect of a graphic novel that only displays one page at a time and will eventually stop. Half the time it doesn't make any sense as the pages were designed to be one page a day, not in a single sitting. This was noted when I was glancing through that Captain Easy book, which, while decades old, runs into the same problem.

But I'm not here to complain about the lack of good webcomics (or newspaper comics, for that matter), I want to talk about making webcomics myself, which has long been a plan of mine, mostly ending in failure. There were a few attempts launched on and offline. There was a whole spin-off blog from Two Way Roads attempted before I even knew what I was going to do. The idea was that it could be used as a repository for sketches before going into "real" comics (the early days of xkcd are like this), but it never took off. There were a few MS Paint drawings of my reactions to community college that I posted and later removed. There was a series called "The Ex-Fanboy", which would take a look at various video games and video game companies. Those are just the ones that actually got off the ground. Another, more extensive college-themed one was planned.

So what happened? Well, two things: one, since a lot of my sketches are one-time things, making a series would be rather steep (even if it's disparate but reoccurring characters) and a second, more pressing thing: I can't draw very well.

I've tried various poses and styles, but nothing ever fully worked. Cars, body shapes, hairstyles, etc. all fall more or less flat. Different hairstyles would be a start, and even the notorious Ctrl-Alt-Del B^U face kind of worked (tilt head to the left), and only gained its notoriety mostly because the author had an insufferably huge ego for a comic strip that wasn't particularly great. But it had readers, it had exposure, and it even had fans.

Yes, I know that webcomics improve over time in terms of art at least. Brawl in the Family started out as little sketches in a GameFAQs thread. It eventually improved art-wise with characters all having a personal spin on them without taking itself too seriously and a few storylines as well. It excellently portrays things common to Nintendo culture (if you've EVER played Pokémon, then you know how useless and weird Cut is). And both BitF and CAD focus on video game culture, an oft-used theme in webcomics, so maybe not the best example for my purposes. With video game comic strips, you either get the generally unfunny Two Gamers on a Couch set-up or some obscure video game reference that only pertains to that game.

So maybe that one isn't going to work. Like mentioned before, xkcd started with more-detailed sketches before drawing stick figures and other relatively simple projects, but then your writing has to do the heavy lifting, but in a way that's better since a lot of well-drawn webcomics can't write.

In the future, I will be posting some older stuff and newer stuff to Carbon-izer, and see what develops from there.
Posted by Pseudo3D at 8:26 PM 0 comments