Back to the Future: The Game: The Review: Part III 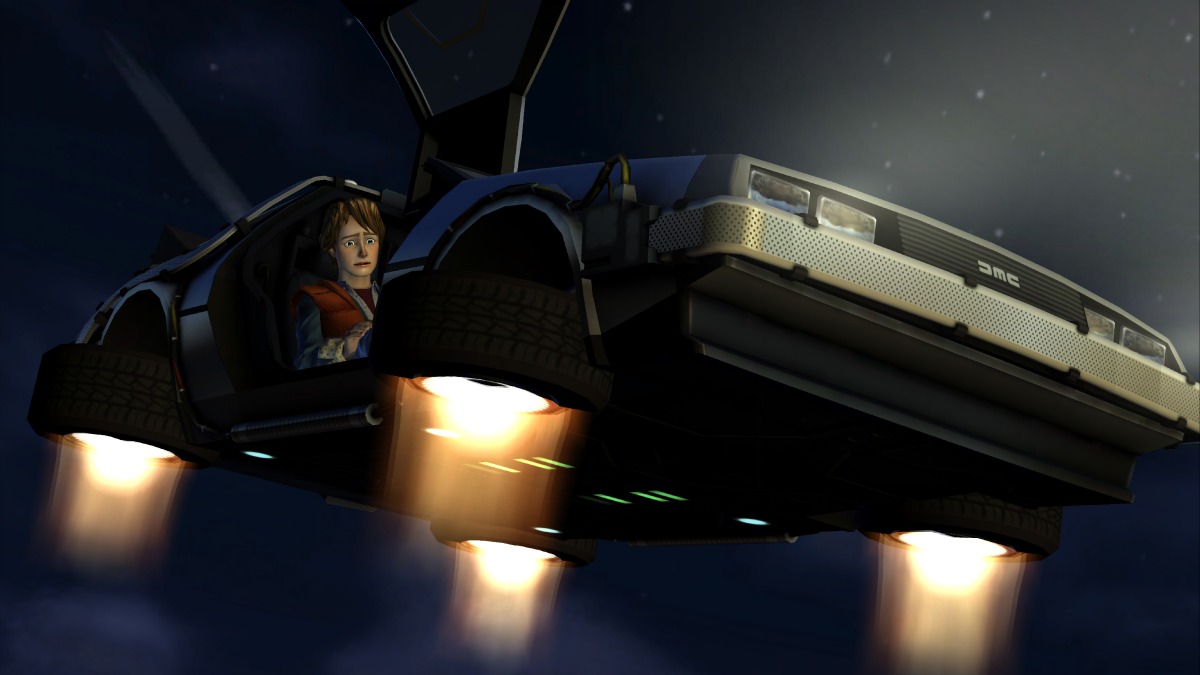 "Wait, in 2017, Donald Trump is President of the United States? You sure we didn't mess up the timeline, Doc?"
The final page of our trilogy, last picked up nearly six months ago, when we covered the remaining part of the Back to the Future: The Game review that wasn't covered in the original review.

Anyway...at the the end of the game has Marty back home in 1986 and several alternate older Marty McFlys (voiced by Michael J. Fox, who makes a cameo in one of the later episodes, and it's apparent he can't quite pull off his own voice), including one dressed like Griff from 2015 come out of different DeLoreans and all start arguing. Then the credits roll, and there's a "To Be Continued" in case they decide to make another set of 5 episodes (unlikely). But in this "New and Improved" timeline, Kid and Edna have hooked up (in prison, apparently...I guess through letters), and Edna serves as a "good" stepmother for Biff instead of Gertrude, who was unseen screechy voice in the second movie. But that would also undermine the plot of the original movie, which largely hinged on Biff being an asshole. It would also make Principal Strickland his uncle. Basically, the damage it would do to the original timeline is incalculable.

If they were going to write themselves into a corner, they should take a ridiculous way out and have the further meddling of the timeline destroy the time-space continuum.

To be fair, the movies played pretty fast and loose with the way time travel worked, one of the most glaring ones being from the first movie where Marty returns home yet is bewildered by the changes at the McFly household, whereas his the rest of his family thinks he's nuts. When Marty goes to 2015, even if it's assumed that Marty will return home and become Old Marty in 2015, but there's never been a case where multiple characters of the same age come up to one timeline, nor where things radically change but old remnants show up, or how they got so many copies of the DeLorean. It just doesn't make sense, at all. At least the movies had their own sort of convoluted logic where the inconsistencies were few and others could be hand-waved away, but not this. Even Back to the Future for the NES was better than this.

The desire to actually make an extended fan fiction of Back to the Future forced gameplay to take a back seat, and combined with Telltale's dumbing down of adventure game elements (part of the fun of LucasArts games was the madcap scenarios and the great writing) it made for a slogging experience. Most of the story was propelled through dialogue trees, not snappy cutscenes, and there are far too many things I can't work out yet (like resolving the issue how the 1885 saloon was owned, or at least built by, a Tannen).

It turns out that the game has been adapted (rather faithfully from the preview images I've seen) into a comic book series called Back to the Future: Citizen Brown. I'm not going to buy it, but in retrospect, reading it probably is a good alternative to playing the game.

Like I said, through all of its problems the story is engaging enough to keep through to the end (looking at when I wrote the review, it's possible I played the other episodes only because of a rather debilitating injury to one of my fingers, making it difficult to play more intense games), but the numerous problems make it hard to recommend, even if you really liked the movie. Part of the problem was the fifth episode, which was scored the lowest by critics and rushed the conclusion. Part of the problem I guess was trying to mirror III's trip back to the Old West, but it would've almost been more interesting to see the "real" Hill Valley 2015. It was already hinted that our reality is the BTTF reality (Doc uses a modern video game controller at some point, which he admits to borrowing from his son's "early 21st century video game systems" or something along those lines), so maybe seeing the "real" 2015 would be nice. But to make that work, you'd have to see the prominent Burger King at 545 Victory Boulevard, Burbank, California (and in 2015 it looked very similar to its 1985 counterpart)...but given how they treat every brand name as toxic waste, even ones that would be relatively easy to procure, it just wouldn't work, and even if they did make the effort (and become a rare positive example of product placement, that there would be Western Auto (not "Eastern Auto"), JCPenney, Robinson's, and others...then it would make the blatant disregard of the universe's rules that more obvious (and in case it wasn't already obvious, the story was written by three people, none of whom worked on the original films).

Point is--it's a great budget-oriented licensed title. As a full stand-alone game that happens to use the Back to the Future license, it sucks. The truth is always somewhere in the middle.

Pictures from this post are from GameInformer and Wikimedia Commons, respectively