In Defense of Robots.txt

Back in April of last year, I posted a rant on why robots.txt is horrible. The real problem then is not robots.txt that I was hating, it was the fact that Archive.org retroactively blocked previous versions of websites that had robots.txt added to them (often domain squatters).

The real problem now is that in this day and age, bots are crawling the web, stealing content and creating clone caches that steal page views. It ultimately brought down Dan's 20th Century Abandonware because there was simply no way to block the bots while allowing full visitor access and findability. I know that my brother's website is somewhat limited by search because he blocks so many of these garbage bots.

Stolen content is everywhere: not in the form of copyrighted torrents (at least, not as much as the Hollywood magnates would like you to believe) but by actual content that was produced somewhere on the Internet and suddenly shows up in no less than half a dozen other areas.
Posted by Pseudo3D at 10:35 AM 0 comments

Well, that's done it. Google now seems to have changed the images on Blogger (look at anything below) to open in a "theater" style layout similar to Facebook (why should I migrate to Google+ if they make the same things, except worse? I thought Google was supposed to be BETTER).

I'm considering a move to Wordpress, merging Carbonizer! (which was never really popular, anyway) and Two Way Roads (which started to become popular, but not what I had in mind). Unfortunately, carbonizer.wordpress.com is taken, so I'll have to think of another solution.

In, Around, and About Brazos Valley will probably be dismantled and moved to another source, but that still leaves comp/mag and Blue Skies and Nintendo.

Plus, I was thinking about using ComicPress for the upcoming webcomic, inspired by Brawl in the Family, one of my favorites.

UPDATE: It seems that others have the same problem, so it's possible there will be an official fix (instead of a script that lets images load normally, but makes the page slower).
Posted by Pseudo3D at 11:16 AM 0 comments

At the bottom of the night

It was just another morning at South Knoll Elementary School, not too long after school started (class started at 7:50 AM in those days), when the phone rang. Usually it was used for teacher-teacher communication (most announcements were done over the PA), and I still remember the genuine shock on her face as she learned that a plane had crashed into one of the World Trade Center towers.

I had heard of the World Trade Center...it was an iconic New York City building, seen it in pictures, but never really considered it.

She turned on the TV: a plane had crashed into one of the towers, creating an ugly burning area in the center of it.

Clearly, I thought, this was a pretty serious accident. Definitely would make the news tomorrow, but it's going to be repaired eventually (after all, years earlier, a plane managed to hit the Empire State Building accidentally, and the building survived).

As she sent us off to gym class, they just sat there, watching.

Only in the afternoon she told us what happened: both towers had been hit and collapsed. I couldn't believe it.

I went to a friend's house that afternoon (as was common, my mother worked a bit late on that day), and continued watching the footage on the TV at home (Tuesday afternoon cartoons had been cancelled...and WB/UPN didn't usually have news).

My mother shielded me from a lot of the tragedy: she would not let us see many of the pictures taken (including, but not limited to, The Falling Man).

I never learned the true tragedy of September 11th that day.

Since that day, I learned more about it. I saw pictures. I've heard people talk about what happened. The harrowing tales of escape from those burning buildings. The incredible heroism of the firefighters and the passengers of Flight 93. The economic recession that followed. The monstrosities of these terrorists, and even the so-called "Truthers" on our own hometurf, which only helped to undermine the efforts to find and punish those responsible.

I do wish the September 11th attacks had never happened. It permanently altered everything that would follow. Wouldn't it be nice to just drop bags on an airport scanner and just relax for your flight, no more taking off your shoes and letting some surly TSA agent feel you? Maybe some things released post-9/11 would be more successful. The Nintendo GameCube and The Shops at Willow Bend both suffered post-attack. The economic recession doomed Service Merchandise and didn't help Kmart prospects much. It destroyed The Mall at the World Trade Center, as it was destined to be an upscale mall.

But that's enough. Please, remember what happened 10 years ago this day.
Posted by Pseudo3D at 6:22 AM 0 comments

Email ThisBlogThis!Share to TwitterShare to FacebookShare to Pinterest
Labels: memories

Here's two scans from an old Prima guide from the mid-1990s, back in the days when Prima was not a division of Random House: 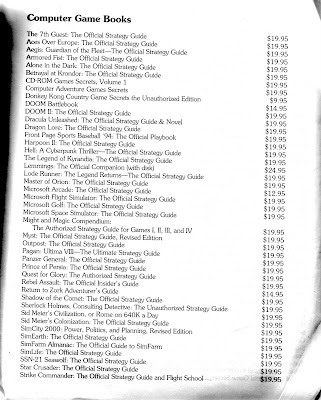 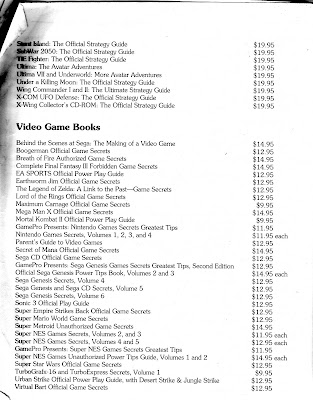 To me, Prima guides were always a step down from "official" guides (unless, of course they WERE the official guide, in which case they were very good). Nintendo published Player's Guides for many years that were far better than the Prima ones (maps, strategies for certain areas), Prima's often had simpler maps and had walls of text. Unfortunately, this is more the case than ever. In most guides, they tend to force you to go in a set path, spoiling everything, and not allowing you to do things at your leisure. This brings them down to the level of what things like GameFaqs have done for years: walls of text (of course, with some pictures). You'd be better off printing off a bunch of HTML from places like StrategyWiki and VGMaps and binding your own, really.
Posted by Pseudo3D at 7:38 PM 0 comments

You know how there's research how most people believe that most people are idiots? Well, I believed myself to be one of those "90% of people are idiots" people, though every once in a while there's evidence to the "Everyone else really IS an idiot" theory. So I was in line at a gas station, just pulled behind a car. Apparently the car had just gotten there because a college-aged girl (about my age, maybe slightly younger) got out and began to use the pump. Used her card, punched buttons (credit or debit? our "engine-enhancing" additive? receipt?), and began fueling. So, after sticking it in her car, she walked back into her car. I thought she was just sitting there, maybe even going so far as to record her gas refueling (yeah right). But then I noticed that there was exhaust coming from the car. That's right: she turned on her engine (possibly for A/C) WHILE HER CAR WAS REFUELING, one of those they tell you explicitly NOT TO DO.

So I drove over to the opposite end of the fuel island (with no cars ahead of me) to fuel up MY car, which in addition to having no one in it (it was rush hour, after all), in the event that her car blows up due to her incompetence, I could have an escape route to flee before the entire station went kaboom. Fortunately, no explosion occurred, which was good because I feared more for the other people fueling their cars than for her. And luckily for her she's probably at home right now instead of being a crispy skeleton.

And this was the same trip that on the WAY to college, someone almost ran into me, I swerved, and I accidentally bit my tongue, which hurts still, but at least my car's intact.
Posted by Pseudo3D at 5:38 PM 0 comments