In case I didn't mention it before, one of my original plans (for a long time, really, dating back to the Two Way Roads era) was to make a McDonald's-related page. While that never happened (yet?), I did make the Mansard Roof page. So, I've decided to show off a June 1993 picture of me and some of my family members (the woman is my grandmother, and I am in the picture--the boy or one of the babies). 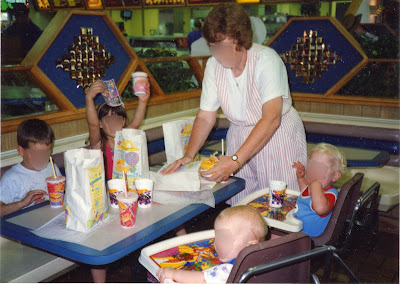 Click for larger size.
Since I've blurred out the faces, I wanted to focus more on the surroundings. It's definitely a McDonald's, but the decor was non-standard (even for the time), and I'm kind of curious to see more of that "Freshly Made" sign. I don't remember seeing that anywhere.
Posted by Pseudo3D at 5:36 PM 0 comments

Email ThisBlogThis!Share to TwitterShare to FacebookShare to Pinterest
Labels: photo, the past

The Problem with the City Sims

So, I finally decided to, in response to my new index page previewed the other day, to try to largely unify some pages that needed it. Take the games index, for example. There's a lot of work to be done still (including on the pages themselves), but at least I migrated everything over from my old blogs and added some backlogged stuff that I had previously written. The newest addition here is The Shivah, a short graphical adventure game that captured my attention for a bit.

While in the process of copying the SimCity 2000 review, I had decided to do some looking into Cities: Skyline, the new hopeful from the brains behind Cities in Motion, and I found this, and decided the author was right, but the fundamental problem is a core audience that grew up with the earlier games and demanding more. You see, after the original SimCity was released in 1989, Maxis released SimCity 2000 in 1993, and still players kept requested that Maxis add more. Most of the "adding new stuff" plateaued around the SC2K era but some were introduced in SimCity 4. Here's some 1995 era requests that people had, posting to the Maxis BBS.

Some were added in SimCity 3000.
- "Until the aforementioned recycle plants become available in time, trash dumps should be considered. (I know, pretty yucky idea, but it's realistic.)"
- "Power Brokerage. You should be able to sell off extra power to neighboring cities for a certain amount per watt, and likewise be able to buy power from neighboring cities."

Some were added in SimCity 4:
- "Toll highways and bridges. Would provide extra income, but at the expense of possible commercial development."
- "Ferries as alternatives to bridges. You'd need one on each bank, fairly close to each other."

Some were forward thinking and have yet to be implemented:
- "Extend the college concept and have a "university" zoning construct. You could zone an area for this and it would promote dense residential (student housing) and light commercial zoning in its immediate neighborhood, the effect depending on the size (small--> virtually no effect, large --> very spread out effect). As time progresses, you could get things like a "free" hospital (med school) and sports stadium. Also, as time goes by, if your university is doing well, it would start demanding more space, which of course will cause all kinds of problems for the neighbors. (I grew up in Austin, TX, which has no shortage of friction between the University of Texas and everyone else.)" [Ed: I grew up in College Station and the university was a big part of the town as well]

As the average player age group moved through college and into adulthood, as well as the advancement of computers, we began to ask for more and more complex things, like larger maps and basically the idea that we could recreate any city we choose in real life, right down to the sprawling cul-de-sacs of suburbia, and have all of that be completely functional. I'm not sure if it's the player majority or not, but I know that a lot of people (including me) would love to be able to control even minutiae like stoplights and railroad crossings, or at least lesser things like if a road is concrete or asphalt. The problem is that when you have a game with enormous development costs (as AAA games are known for these days), you have to appeal to the mainstream and approachable. And that is where the divide is. To make a game that would be universally adored by everyone and sell like hotcakes, a publisher (such as Colossal Order) would have to do four things:
- Make it simple enough that a child of average intelligence could reasonably, without cheating or poring over a manual, build a large city, even if those underlying mechanics ran terribly
- Make it complex enough that a post-college adult with a degree in Civil Engineering could reasonably, without using tons of hacky mods and sandboxing, a reasonably "realistic" city, even if those underlying mechanics were "faked" slightly
- Make it approachable enough that it would garner a mainstream audience, even if they played it for a few hours and never again
- Make it hardcore enough that it would garner an audience of supergeeks that could spend hours trying to tweak one thing in a master plan

Because of computing power and the demographics at the time, the first three SimCity games could reasonably do all four. With SimCity 4, it shifted in the hardcore direction, which alienated the mainstream and cannibalized sales (thus ending official development). The new SimCity might have had some of the more complex portions earlier in development, but all of that was purged and mainstreamed into the mass market. The problem was it still lacked the "complexity" issues that the hardcore wanted, and worse, it lacked the tools to reasonably do that with. In any case, nothing can be done to truly capture the heart of even "most" of the hardcore (as in, the ones that still hang out on Simtropolis and SC4 Devotion over 10 years after the game was released) and the money of the mainstream.

I don't think it can be done. It hasn't been done for the last 12 years, and there's no reason to think it will change.

I know I haven't done a lot of things with this blog in recent months, but I am committed to getting everything back and up running (making the blog the "base" of the site was a mistake). Here's a sample of how the blog might look. What do you think? Part of the reason why I like this design is because it forces me to update all of the ones that need updating (NW Freeway and the Fast Food list have gotten a lot of love recently, but the Games Index needs help). And those are just the complete ones. There are some backroom projects that I haven't gotten up because they're incomplete.
Posted by Pseudo3D at 6:58 PM 0 comments