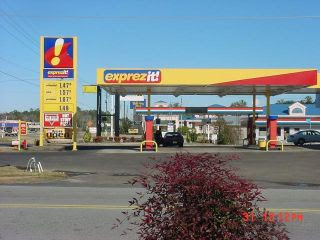 Photo by Tod Allen, as seen on GasSigns.org (reduced resolution)
Recently, I discovered an interesting site, GasSigns.org and was pleased to find a good picture of exprezit!, a gas station brand I'm pretty sure has been defunct for a while now. I felt especially connected to it as December 2003 was when I first saw it and I'm pretty sure this is the right location too. December 2003 was one of my favorite Christmas vacations, a time with just about everything you could want from a vacation, from great sights on the road to visiting theme parks (Busch Gardens!) and of course, a nice Christmas. I got a DVD set of Back to the Future and the GBA port of Super Mario Bros. 3 (or, rather, Super Mario Advance 4).

At the time, I was really into gas stations (especially with food outlets connected), and noting color schemes used (Citgo favored an orange, white, and blue, Chevron and Exxon had red, white, and blue, Shell had red, yellow, and white) and it was definitely a cool thing to see the exprezit!, which featured not only a wild-looking exclamation point but an even more awesome red, yellow, and blue scheme, one of the many things that set Florida apart from where I lived, a comparatively dreary college town whose most defining features were a mish-mash of buildings in the university, most prominently structures from the 1970s and 1980s.

exprezit! seemed to gain traction in places beyond where it had full gas stations, as it was installed in several BP stations in Louisiana, and then...well, it kind of seemed to disappear. Now, there are still gas stations with the exprezit! name around (at least convenience stores), but even the gas station in Marianna is gone, now a run of the mill Valero and at least one name before that.
Posted by Pseudo3D at 3:02 PM

Email ThisBlogThis!Share to TwitterShare to FacebookShare to Pinterest
Labels: the past